Is Spinning allowed in table football?

No Spinning is allowed!

"No Spinning – This is probably the oldest foosball rule in existence. The foosball rules state that the rod cannot rotate in excess of 360 degrees before or after the man advances the ball upon impact. The foosball rules also state that you must have clear control of the handle at all times. The penalty for letting your hands go and spinning the rod is a loss of ball possession. If you spin then your opponent gets to reserve the ball on his 5-man rod. So, keep your hands on the handle and don’t let go." - www.warriortablesoccer.com

This article will explain who is allowed to spin in the foosball and why it is not allowed.

Foosball has traditionally been a game played with two players, using a rod and a rounded metal ball to hit the other player's side of the table. The object of the game is for each player to score by shooting their ball into the opponent's goal while preventing their opponents from scoring on theirs.

However, one notable exception in these rules was whether or not it was permissible to "spin" the bar. You cannot do a 360 degree rotation of the bar, if you are playing to the rules

Some games do allow you to spin

When you are not playing regulation rules, maybe there are some children involved, or you are not good at foosball, then it is up to the individuals involved to decide whether or not the incidental spin that you use in a game of foosball is OK.

How to play better foosball without spinning

Spinning will change the game into a travesty. Uncontrollable spinning takes the part of skill away from the game. As you get better at foosball, not spinning, and hitting the ball properly will cause the ball to go much faster and with better control than it ever could with spinning. So keep at it!

What is the penalty for spinning in foosball?

The penalty for spinning is that you must give you opponent the ball and he give it to his 5-man rod.

How many points do you need to win foosball?

Generally the person with the most points wins the game, or 5 points

In conclusion, it is implied that you must not spin the rod beyond 360 degrees by default in most table football rules. If you do then you will be penalised.

"Almost every conventional set of rules included the following provision: "Rules for table football forbid spinning of the men in excess of 360 degrees before or after the ball has been moved forward on the playing surface. To do so is a foul." - www.seattlefoosball.com 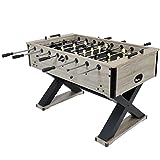