There are basically two types of Foosball Table, those that have one goalie (Single Goalie), in the center, and those that have three goalies (Multiple Goalie) on the back line. Different people have their own preference for the type of table they prefer. But if you are serious about your Foosball, then you should become a used to playing on both multiple and one goalie foosball tables.

If you do not want to read the entire article - below are the choices made. Read on for the full story! 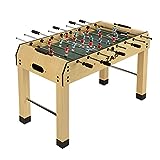 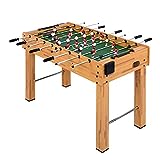 Apart from the obvious difference in the number of goalies, the One Man Goalie Foosball Table has sloped corners. If the ball goes to a corner, it will roll back into play. A single goalie cannot get right into the corners, which is why the slope is needed. There is no need for sloped corners in the multiple goalie system, as there is nowhere on the pitch a player cannot reach the ball.

Most people do not realize that on a multiple goalie table, only the center player can block a shot on goal. The outside two goalies do not have the range to cover the goal. It is really one goalie, and two players to get the balls out of the corners.

The single/multiple goalie system is the reason that the number of men on a foosball table is sometimes quoted as 22 and 26. The two extra goalies on each side boost the number of men by 4. It also explains why when you buy a full set of new men for your table, you have “spares” if your table has the one goalie setup.

One Man Goalie Foosball Tables were really the only ones that were available 20 or 30 years ago. I believe it was Tornado that initially released the multiple goalie system. There were two reasons that this happened.

1) The sloped corners of the Single Goalie Table meant the ball could fly off the table. This did not happen very often, but it was the reason given.

2) It is cheaper to add multiple goalies to the back line, than it is to make a playing surface that is curved at the corners.

In Europe and England (Where I am from) you very rarely get professional quality tables with multiple goalies. They are almost all One Man Goalie setups.

So which type of table should be used in Competitions and Tournaments? The actual answer is either! Competitions are played on both Single Goalie and the multiple setups. So if you prefer the one man goalie, make sure you check, and enter the right competitions.

There are conversion kits available to convert some multiple goalie to the one goalie tables. You should never cut or break the men off as this could leave you with an unbalanced rod.

How To Convert To A One Man Goalie Foosball Table

1. Find out if a conversion kit exists for your table and buy one
2. Detach the three players that are currently on the goal rod.
3. Slide the rod out slightly and take the loosened men off.
4. Put the rubber stopper on the far end rod
5. Put the goalie on to the bar in the middle (facing the right way)
6. Put the second stopper on the far end of the bar.
7. Do the same for the second side
8. Attach the four sloped corner pieces to each corner with something like double-sided tape, or whatever the instructions recommend using.

These are just some of the many types of foosball tables that exist. Hopefully, this has given you a good understanding of one man goalie tables and what to look for when shopping. Depending on your needs, there may be other types better suited to you, but in general these are great options for anyone who wants to play foosball at home or in a smaller space.

If you want to come out on top when playing foosball with your family or friends, it's important not only to learn the rules but also how all the different pieces work together.

if you have an comments, questions, or other foosball table related ideas to share, feel free to post them below.

Why do some foosball tables have 3 goalies?

Since in the beginning, foosball tables had 1 goalie, which was meant to imitate the number of goalies on a real soccer playing field, it is natural to wonder why some foosball tables have 3 goalies instead of one.

It all started in 1980, with the 3-man goalie Tornado, which was designed for Ed McCloud. The designer of the 3-man goalie rod explained that the table with 3 men on the goalie rod was built because there wasn’t any other way to install the ramps with the tools that were available.

Can 1 goalie be replaced with 3 goalies?

While you can easily change the table from 3 goalies to one goalie in some tables, with the help of a kit for your table, the other way around might be more difficult.

Checking the corners on the foosball table to see if you have enough room to install a corner ramp is essential for replacing the three goalies with only one goalie, while in the situation where 1 goalie needs to be replaced with 3 goalies, you should check how the corner ramp is mounted to the playing surface

. In order to replace 1 goalie with 3 goalies, you need to see if the corner ramp is glued, if screws were used for mounting it or if the corners have a bend directly in the surface.

Where are one and three goalies more popular?

The one goalie setup is a popular setup in Europe, while the three-goalie system or multiple goalie system is most used in the USA, where most people view it as a standard. In Europe, three goalie foosball tables are not that easy to find.

The same happens with one-goalie foosball tables, which are hard to find in the US.

www.foosballtips.com , article, “Foosball One Goalie Or Three “, retrieved on, Tue 28-May-2020