Foosball: Cool facts you don’t know about it & you should!

Everything You Need To Know About Foosball – Playing, Equipment Etc

Foosball which is also referred to as table football is a game that has existed about a century now. To many people, foosball is just an entertaining game that is based on the sport of football/soccer.

The aim is to score in the goal of the opponents using the control handles. Unlike in other sports such as football, foosball does not have universal guidelines and rules on how to play and may vary from country to country.

The history of foosball has been heavily contested over the years for different reasons. It has been impossible for researchers to pinpoint the date the game was invented because it has been claimed to have been developed by different people in different countries from the 1920s through to the 1940s.

Although many people have disputed its origin, Harold Thornton is considered being the actual inventor. History shows that Harold Thornton patented the game on 14th October 1921 in the UK.

He came up with “foosball” game after watching a football game at Tottenham Hotspur. Harold wanted to simulate the football within a small confined space to allow people to enjoy the game in the comfort of their homes. The name Foosball was inspired because many Europeans referred to the game as “real sports football” while the design of the game was designed from the box of matches attached to rods.

According to Le Soir Illustre Belgian magazine in November 1979 issue, Foosball was invented by a French inventor Lucien Rosengart in the 1930s. The magazine claims that Lucien Rosengart came up with the game when looking for things that would keep his grandchildren occupied and entertained during the winter and called it “babyfoot”.

Another inventor who is also credited with the invention of table football is Alejandro Finisterre who is said to have patented his version of foosball going by the name “futbolin” in 1937 in Barcelona, Spain.

Over the years, Foosball has progressed and been introduced to many countries around the world and serves as the major event in many arcades, bars, home game rooms and parlours.  Lawrence Patterson is said to have brought the first foosball table tops into the United States in the 1950s.

The game has grown in popularity ever since. The game has become widely accepted in many countries, and international competitions and tournaments have been introduced to foster the new players and bring different people together.

Foosball game is simple to learn, as many people quickly understand it and become fascinated by the whizzing ball flying across the table. Playing the game involves using miniature players who are mounted on rotating rods to kick the ball and much like in Soccer, the aim of table football is to score into the goal of the opponent. Football tables vary in size depending on the preference of individuals and the playing space that is available. However, a typical foosball table is approximately 4ft (120cm) long by 2ft (60cm) wide.

The Foosball table game is usually designed to have eight foosball rods holding the miniature players called “foos men” who are made of wood, plastic, metal or carbon fibre on horizontally placed metal control rods. The game can be played by either 2 or 4 human players with each of the team controlling four rows of the player figures which are made of the strikers, defenders, midfielders and the goalkeepers.

The game can be played by either two persons (singles) or 4 people (doubles) which involves playing a team of 2 people on each side. In doubles, one player is tasked with controlling two defensive rows while the other member of the team controls the attack and midfield rows. The role of the human players is to control the control rods and manipulate the “foos men” to pass, hold or kick the foosball towards the opponent’s side.

The guidelines of play for the sport are quite simple; apart from no unsportsmanlike play conduct and no spinning the men, most of the regulations of the game govern the pace of the play. The set rules intend to ensure that the matches between the competitors are fair and ensure that the game is enjoyable. When playing at high foosball competitive levels, use of officials is optional, although many players prefer the self-officiating match where they are all aware of the basic rules.

Many of the regulations at this sport consider “spinning” illegal! This is a situation where the foos players use the palm of their hands to spin the control foosball bar at a 360-degree spin. However, 2 full 360 spins were allowed at the world cup and the annual world championships in 2012. Players may set their own guiding rules as there are no universally accepted rules and regulations.

The International Table Soccer Federation (ITSF) was introduced in 2012 to standardise the rules and regulations around the world for international competitions. The role of the organisation is to administer and regulate the game through its affiliated national federations and associations.

It is also responsible for setting the technical specifications of the foosball tables and enforcement of the anti-doping programs. The winner of the game is determined when one individual or team scores a set number of goals which usually first to 5 or 10 goals.

Over the years, foosball has gained a lot of attention, and today, it is regularly played for fun in areas such as pubs, clubs and schools. However, many competitions have been run by different organisations for all age groups to promote the sport globally. Today, this barroom favourite game is not just for play; there are a lot of global competitions and professional players competing for major awards and titles.

Research shows that foosball competitions began as early as in the 1940s when the first Table football world cup was organised and ever since it has become a professional sport globally. As a result, an official rulebook was created by ITSF to promote competition and also push it to become a recognised sport in the Olympics.

The International Table Soccer Federation (ITSF) is tasked with running and regulating major foosball international competition events, which include the yearly world cup competition and the world championships. The foosball world cup takes place every year and comprises five continents and 60+ ITSF Tournament tour where best foosball players from more than 40 countries compete for the global titles.

The ITSF sanctioned competitions are mainly held at the member nations of the organisation and usually feature individual competitors who are subdivided into different categories by gender and age group.

A foosball table refers to the tabletop that is used to play the foosball game. The foosball table comprises 8 rows of players mounted on metal bars. Today, different football table tops have been invented, and they come in different styles, sizes and colours to suit the preferences of the players.

The different varieties of tables make sure that foosball players can find the best table, which works with their taste. The architectural designs of the tables are influenced by the raw materials and resources available when constructing the table with each country offering something unique towards the making of the tables.

Many foosball tables are designed with only one goalkeeper whose movements are only limited to the area of the goalpost. Some tables are built in a way that the goalkeeper cannot reach the ball once it is stuck on the far-post corner, while others have sloped edges to direct the ball back to the pitch.

Another significant table difference is based on the balls which can either be made of wood or other types of materials such as plastic, metal and marble. These variations also affect the style of play in that they vary the speed of the shots and the grip between the foos men and the foosball and the playing surface. These variations have a significant impact on the actual style of playing Foosball, ranging from action-packed to slow and strategic style of play.

As a result, ITSF has been tasked with dictating the brands to be used in the game to ensure standardisation and that only the best quality models are used. The main table brands that are used at the International Table Soccer Federation competitions are:

The American style foosball tables which include Tornado and Fireball are recognised for their hard playing surface, which according to professional players facilitates rigidity and the speed. They are a cross style between the French and German style to create a table that focuses on ball control, passing and shot execution.

French style: these tables have “telescoping” rods that cannot protrude from the other sides and have a cabinet that is bowl-shaped. This style is loved by many parents because it is safe for kids. The table is designed for a type of play that is described as fluid.

These tables have sloped corners and a single goalkeeper with some of them using sanded glass to make the ball move at high speeds. The technique prevents the foos men from becoming loose and ensures that the game rolls faster.

Spanish style: the Spanish style of play is skill based, which concentrates on the hand-eye coordination of the players on the curved playing surface of the table. This style of game has many back pins to maintain possession and trap the ball rather than passing back along the same rod.

The Italian model has angled legs which hold slippery surfaces or glass tops. This promotes a fast and free-style of play whereby pinning is difficult.

The playing style used in Czech is very similar to that of the Germans and Americans. It promotes a lot of controlled play with brush passing and snake shots, a form which is mainly dictated by the manufacturer (Rosengart). In recent Foosball competitions, the Rosengart table has been certified by ITSF body as a professional foosball table. 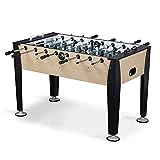 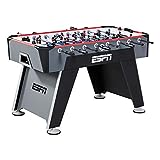 www.familyeducation.com , article, “Are You Ready Some Foosball”, retrieved on, Tue 28-May-2020